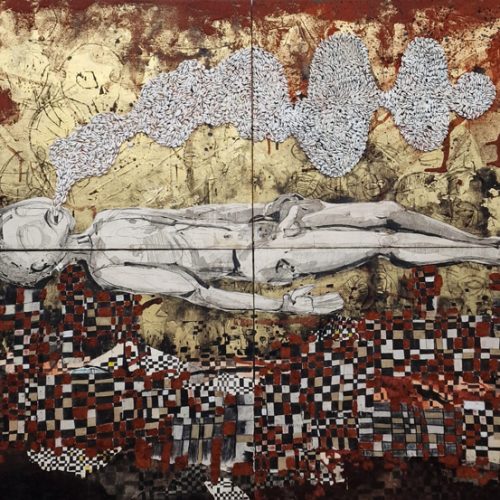 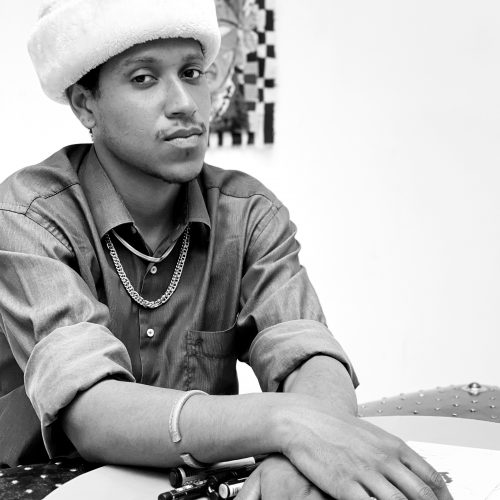 Of French and Yoruba origin, Kevin-Ademola SANGOSANYA was born in Longjumeau (91) in 1996. Even if the environment in which he grew up did not intend him to become an artist, his mother being a scientist from a working class background and his father, a Nigerian immigrant, a former soldier, he felt a vital need to draw all day long at a very young age. His mother encouraged him to take drawing lessons after college, but as he mostly painted monsters and dinosaurs, he was quickly directed towards a scientific career. At 15, he wants to be a paleontologist and then a geneticist specializing in endangered species. His love for Nigeria, where he has traveled very often since his childhood to visit his grandparents, leads him to focus on endangered gorillas. Thinking that the best way to protect them would be to allow them to live in an environment where they would not be hunted, he decided after his baccalaureate to focus on sustainable development and began studying agronomy engineering. At 17 he discovers independence and student life. He leaves the family nest to move closer to Paris and settles in residence in Cergy. He did many internships abroad as part of his studies, including his graduation internship where he spent 8 months in Nigeria working on the conservation of forest species, reforestation, and the study of medicinal plants, food and sacred which make the link between the three areas that fascinate him, the preservation of culture, the sustenance of populations and spirituality.

In parallel to these strong experiences, he finds it difficult to settle for a simple life as a student in the suburbs. He quickly feels a void in his life that he does not see in his comrades. From his second year he resumed drawing and then quickly Graff under the pseudonym of “Lonely Jane”. His graffiti-poems are enjoying growing success, but to go even further, he compulsively picks up objects in the street which become multiple supports for the creation of increasingly elaborate paintings-objects. But it was when he discovered the works of Kehinde Wiley, Kerry James Marshall and Jean-Michel Basquiat that he really clicked. The stereotype he carries in him of the artist as necessarily being an old white man is swept away. “At that time, I said, OK, it’s good, you’ve had the thing in you since the beginning, it’s been several months since it started boiling, you start doing graffiti, drawing, picking up stuff, now you have to go all out… I understood that it wasn’t just a hobby, that there, it was devouring me not to create”. He began to present his works in neighborhood exhibitions and then in 2017, he was selected to participate in the “Emerging Artists” exhibition at the Carreau de Cergy. After obtaining his engineering degree in tropical agronomy, he also joined the Ateliers REZOEST at Pré-Saint-Gervais. His very personal work centers on the quest for oneself and the reflection on one’s own identity.

First of all the “Who am I? “. Aware that we are still formatted by our condition of gender, age or culture, he understands that only art can allow him to transcend himself. For him, a young, black, mixed-race man, bearer of a double culture and vehicle of a pejorative image of African culture and identity, the important thing is to question this mixed-race identity by understanding its origin but also by building a new language to offer unprecedented access. “When I was younger, I felt a lot of anger, an energy that I couldn’t channel. I realized that this frustration came from the fact that I could express much more complex ideas in French or in English than in Yoruba and that when thought is slowed down, and you don’t have the tools, this frustration leads to anger.” He then began professional training for a Yoruba Language diploma at INALCO to complete his empirical knowledge of the language while developing his own plastic language from numerous symbolic elements such as nails, cauries, writing and use of materials that he produces himself from plants or found objects.

2022
Objects in motion will stay in motion / An indepth conversation with the Ori. Galerie La La Lande, Paris.